THE GODS OF THE GRIDIRON SERIES 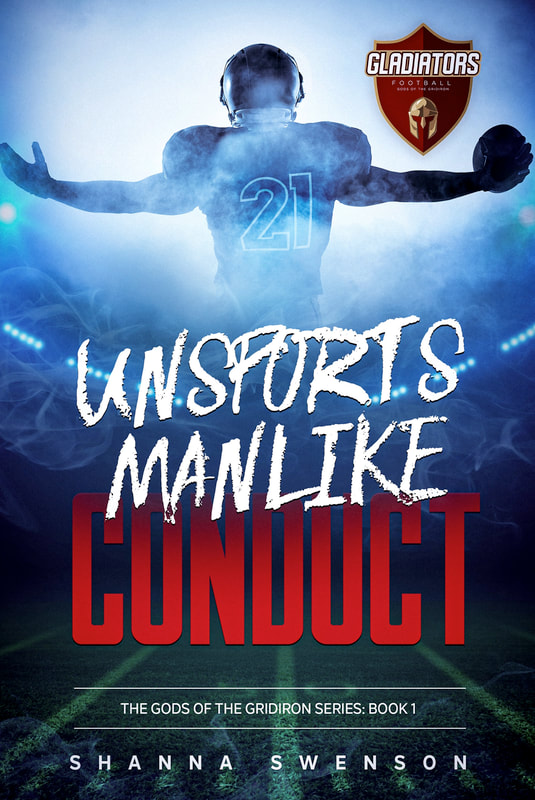 Travis Redmond, the ram of a running back for the Atlanta Gladiators, may be a lot of things­—hot-headed, arrogant, rash—but a cheater isn't one of them. Until cheating is the only option he has to save his brother, Tucker, from the clutches of a dangerous criminal mastermind.

When his impulsive actions get him an UNSPORTSMANLIKE CONDUCT penalty and he ends up suspended and back in his hometown of San Antonio, Texas, the last person he expected to see again was Skyla Larson, his former classmate from Brevidge High.

Skyla isn't the shy girl he remembers from Biology. She's changed after a decade and man, is she scorching hot now… and with the sass to go along with it too! Sly little Sky’s got a few secrets of her own, including a particular person she's investigating as Atlanta’s assistant district attorney.

Their reunion and bar-side banter are short-lived though as these two suddenly find themselves running for their lives...and falling in love on top of that!

Love has poor timing, especially when they have everything to lose including their hearts…
The “god of war” may have found something worth fighting for—the mighty Aphrodite of his.

Posted by The Prairies Book Review on Saturday, August 29, 2020 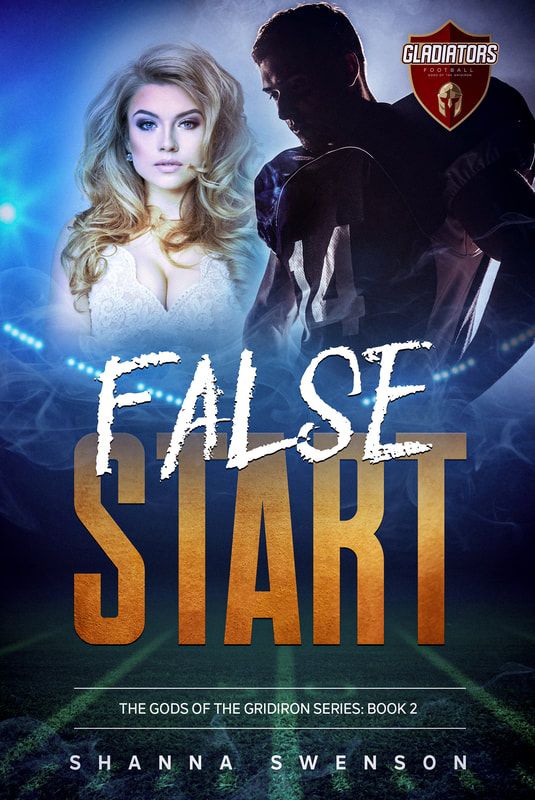 Brett “Brickhouse” McFadden may be called Zeus on the Gladiators football field, but when the man who’s been his best friend and favorite receiver for over a decade gets killed instead of him, he’s completely helpless and left to pick up the pieces Hunter “Hermes” Thomas left behind.

The one and only constant in Brett’s life has always been his hidden love for his first best friend, Madison Thomas, the perfect girl he fell in love with at seven—yes, seven—years of age, who also happens to be Hunter’s widow. Love is complicated after all!
Now that Hunt’s gone, Madi needs him more than she ever has, and Brett feels utterly blessed to be given this second chance, but will the shameful guilt be enough to kill him too?

Madison Thomas, CEO and VP of the Atlanta Gladiators, thought her life was well-established, until the unimaginable happened; the abrupt death of her husband, Hunter. Her overdependence on her best friend, Brett, begins to intensify as the darkest days of her life follow and she finds herself bombarded with the regrets of her past…and the unavoidable attraction she’s always felt for the perfectly-sculpted “king of the gods”.

As new revelations come to light, Madi starts to see that Hunter wasn’t the husband—or man—she thought he was. Now, she must storm past the FALSE START she was given and embrace the possibility of a do-over with the one she’s always wanted—Brett McFadden.
​
Will the “god of thunder” prove to be the better contender for Hera’s heart or will this long-suffering Olympian forever remain fourth and inches from his ultimate goal line?
​
BUY NOW ON KINDLE
BUY NOW IN PAPERBACK 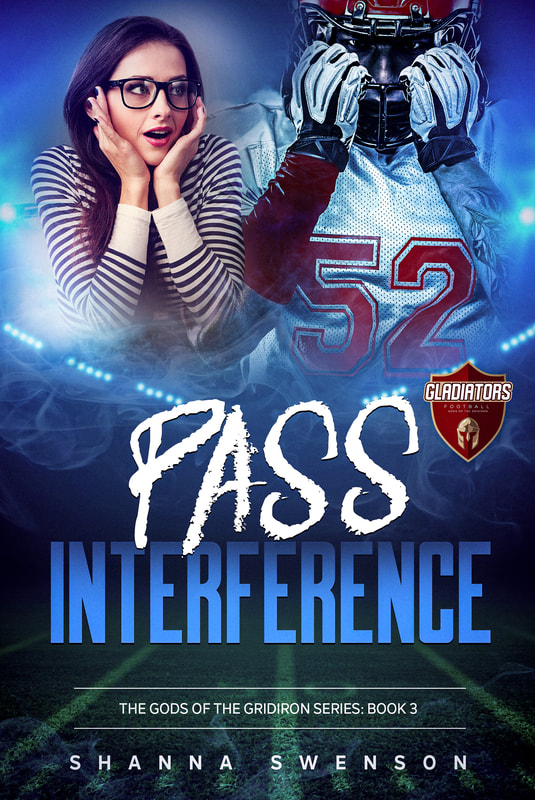 The god of the seas, Poseidon, is known for unleashing the Kraken…

Paxton Guthrie, aka Poseidon, is in the prime of his young life. He’s one of the best linebackers in the league and has a carefree attitude that rivals his chosen profession.

When a charity date takes place and he’s the raffle prize for the lovely, diehard #52 fan and local historian, Rebecca Ryan, a promising night on the town ensues. But these two unsuspecting souls are in for the surprise of their lives after the media catches them red-handed in a compromising position!

All bets are off as they must fake an impromptu engagement, deal with their angry friends and families, and “play house” while the Gladiators’ reputation hangs in the balance… along with the real possibility of a Super Bowl.

But Poseidon never imagined he would find his Amphitrite before he was ready! And neither the sweet-spoken Irish lass nor the jealous god himself anticipated falling in love.

Their characters aren’t the only things at stake here. Family ties are perhaps sturdier than anything the Greek gods can invoke. PASS INTERFERENCE must be run in this instance—even if it’s from the defense.

Will Pax and Becca’s love be strong enough to withstand a raging ocean of mistrust or is the arrogance of the sea god enough to knock him off his pedestal on Mt. Olympus?
​
BUY NOW ON KINDLE
BUY NOW IN PAPERBACK 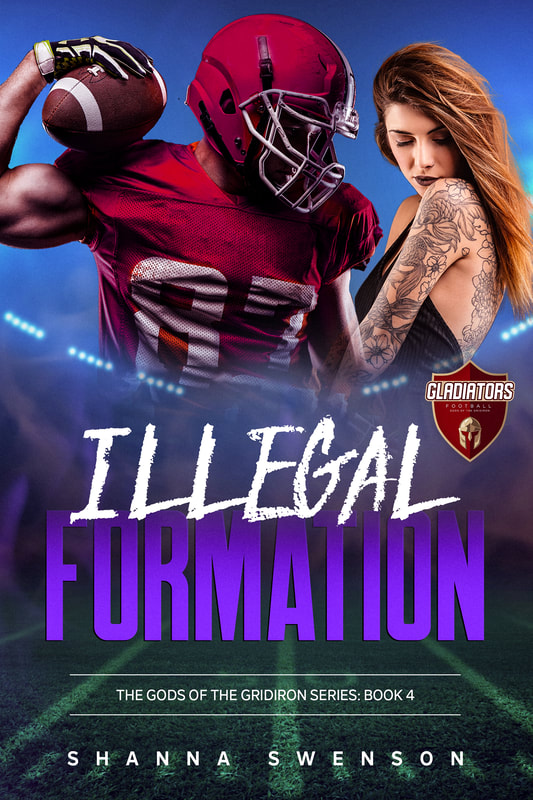 TE, Quillan Layton, is settling into his role as the newest player for the Gladiators. He’s embracing his brooding and dark character’s namesake. Hell, it’s easy to be such when your life is as skewed as his is. After all, he’s a single dad and the widower of a former drug addict who’s not looking for love—not in the slightest.

Though when he sees bad girl, Veda Ryan, at Paxton’s Halloween party, he might just be eating crow. This tattooed, pierced, and cynical Irish “snake-charmer” has more up her sleeve than ink, and one scorching hot night with her isn’t quite enough to satisfy the ravenous god within just dying to be unleashed.

Veda, the sharp-tongued twin of Becca’s, is an unhappy cheerleader, reluctant stripper, and passionate model-wannabe with a determination as strong as her colorfully art-clad skin. She sees the tall, dark, and delicious half-Spanish sex god, Quillan, and knows immediately that she has to sink her teeth into him, come Hell or high water, and does so that fateful Samhain night in an ILLEGAL FORMATION of epic proportions.

But Quil and Veda are in for a rude awakening. The old saying goes that if one plays with fire, one is bound to get burned and burned these two lovers will be as they fight their sizzling attraction for one another tooth and nail.

Will a devastating secret be enough to bring them colliding together or will it doom Hades and his Persephone to a fiery pit of never-ending regret?
​
BUY NOW ON KINDLE
BUY NOW IN PAPERBACK 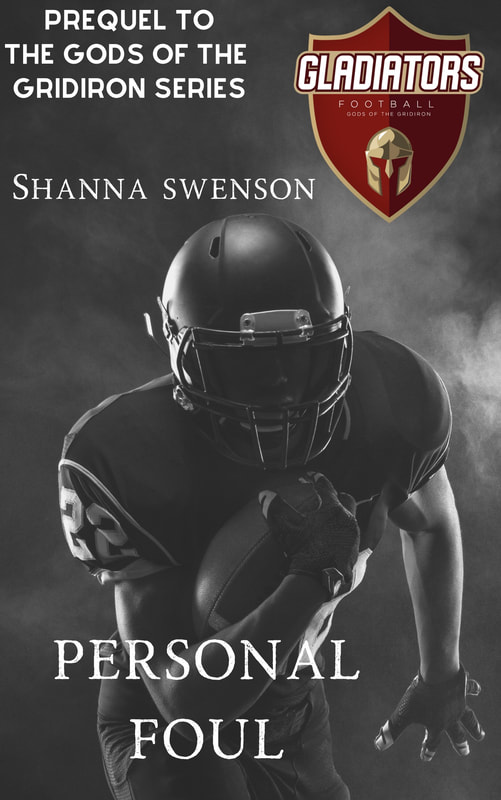 He lost all motivation and quit the NFL. Then his wife of five years left him.
And he slipped even further into an abysmal pit of depression.

But, his life is about to take a drastic turn-- Following a chance encounter with a stranger in a lone bar in San Antonio, he’s now feeling death’s cold grip start to suffocate him, for he’s gone and done the unthinkable- he’s committed suicide. He’s dying. And alone. Or is he?

Is all lost? Or will fate give him another chance?

The penalty flag has been thrown-- and Lincoln’s got a personal foul. Is the game over for good or can love redeem him?
​
***

**POSSIBLE TRIGGER WARNING**
This novella is intended for an 18+ audience. It discusses darker, more sensitive topics that may be triggers for some—death of a child, a suicide attempt, and has mildly graphic sexual content.


AVAILABLE IN EBOOK FORMAT ONLY, FOR ALL EXISTING AND NEW NEWSLETTER SUBSCRIBERS, CLICK THE CORRESPONDING LINK BELOW TO GET YOUR FREE COPY.
FREE EBOOK (NEWSLETTER OPT-IN REQUIRED)
SUBSCRIBERS CLICK HERE